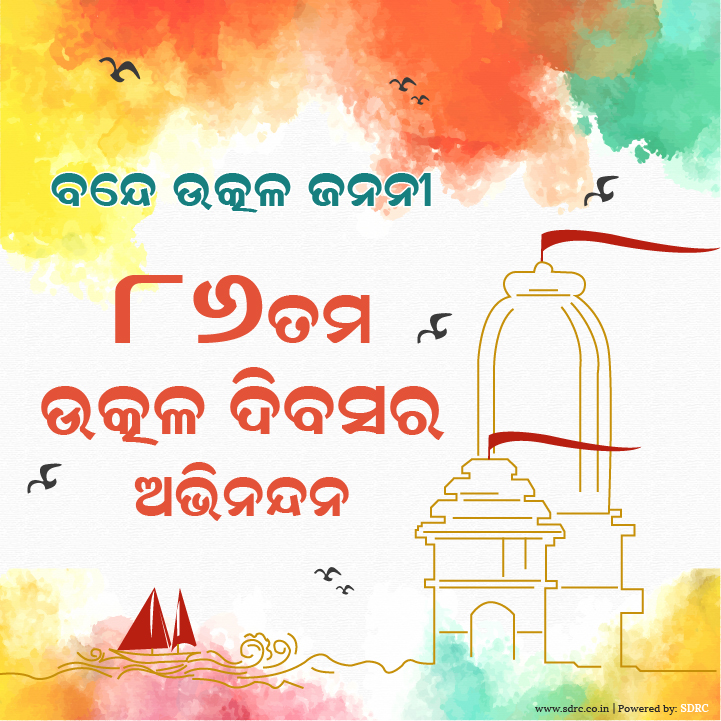 On April 1, 1936, Orissa (now Odisha) became a separate province to be formed on a linguistic basis, and the date since then is commemorated as Utkal divas. The modern state of Odisha owes its existence to a unique language movement and the sacrifices and contribution of some great personalities. On this 85th formation day, we pay our tributes to the makers of modern Odisha.

Utkal Gourav Madhusudan Das
Utkal Gourav Madhusudan Das played a crucial role in the unification of different Odia-speaking tracts into the first Indian state formed on a linguistic basis. He founded Utkala Sammilani in 1903 to campaign for the unification of all Odia-speaking regions, which was open to all Odias of princely states, British Odisha, and those domiciled in Odisha. At his behest, Lord Curzon took a decisive step towards uniting the dispersed Odia regions under the Bengal administration. On January 1, 1915, he was felicitated by Sir Surendranath Banerjee for becoming a pioneer in building the states on a linguistic basis.

Utkalmani Gopabandhu Das
One of the pioneers of Odisha as a separate province, Utkalmani Pandit Gopabandhu Das joined the Utkala Sammilani in 1903 and became its president in 1919. After he became the first president of Utkal Pradesh Congress Committee, he urged the Odia-speaking community to join the party in large numbers as their demand for a separate province and other rights could be met only by participation in the national forum and movement. He welcomed Mahatma Gandhi in 1921 and persuaded him to adopt the primary goal of Utkal Sammilani of organizing states on a linguistic basis. He also extensively traveled Chaibasa, Chakradharapur, and Ranchi to unite Odias in Bihar province.

Maharaja Krushna Chandra Gajapati Dev
To accelerate the Odia movement in Ganjam, Maharaja Krushna Chandra Gajapati Dev hosted the 10th Utkal Union Conference in 1914, which was attended by Madhusudan Das, Fakir Mohan Senapati, Gopabandhu Das, Sashibhusan Ray, and others. Five years later, he demanded the Montegue Chelmsford Committee to provide the Odia community in Madras to cast special voting rights that would enable them to elect 10 Odia members to represent in Madras Assembly.

Maharaja Sriram Chandra Bhanj Deo
Maharaja Sriram Chandra Bhanj Deo played a key role in the integration and unification of Odia-speaking regions as well as the development of Odia language. He endeavored to develop economic resources by establishing industries, developing language and literature, and educate and reform society. He also funded the construction and renovation of some important institutions as well as initiated to reorganize the State Press that was established by his father.

Vyasakabi Fakir Mohan Senapati
Through his writings, Vyasakabi Fakir Mohan Senapati played a key role in establishing the distinct identity of Odia language and literature. He believed that nationalism and language are interlinked and nationalism was determined by language. All his life, he remained a staunch supporter of the creation of Odisha as a separate province.

Kabibara Radhanath Ray
The contribution of Kabibara Radhanath Ray heralded the revival of Odia just when the language was on the verge of extinction. Some educationalists in the four provinces wanted to abolish the language as the medium of teaching, which was opposed by Kabibara and his contemporaries. Serving as the Inspector of Odisha Schools Association, he tried to promote textbook writings. He was born on September 28, 1848, and died just five years after the formation of Utkala Sammilani in 1909, at the age of 59. But his works contributed a lot to Odia literature and laid the foundation for the linguistic renaissance.

Gangadhar Meher
The contribution of many great leaders during the late 19th century led to the formation of Orissa as a separate Province. Swabhaba kabi Gangadhar Meher was one of them. One of the most prolific and original contributors to Odia language and literature, his were strong enough to infuse grand Oriya feelings among the separatists.

Dr. Harekrushna Mahatab
Before the merger of the Gadjat states, there were 26 princely states in Orissa and the rulers exploited their subjects in numerous ways. The common people were bound to pay various taxes and had no fundamental rights. Utkal Keshari Dr. Harekrushna Mahatab participated in All National Movement of the feudatory states of Orissa and supported the exploited people to fight for their rights and against the oppression. Post-independence, Dr. Mahatab played a crucial role in unifying the feudatory states.