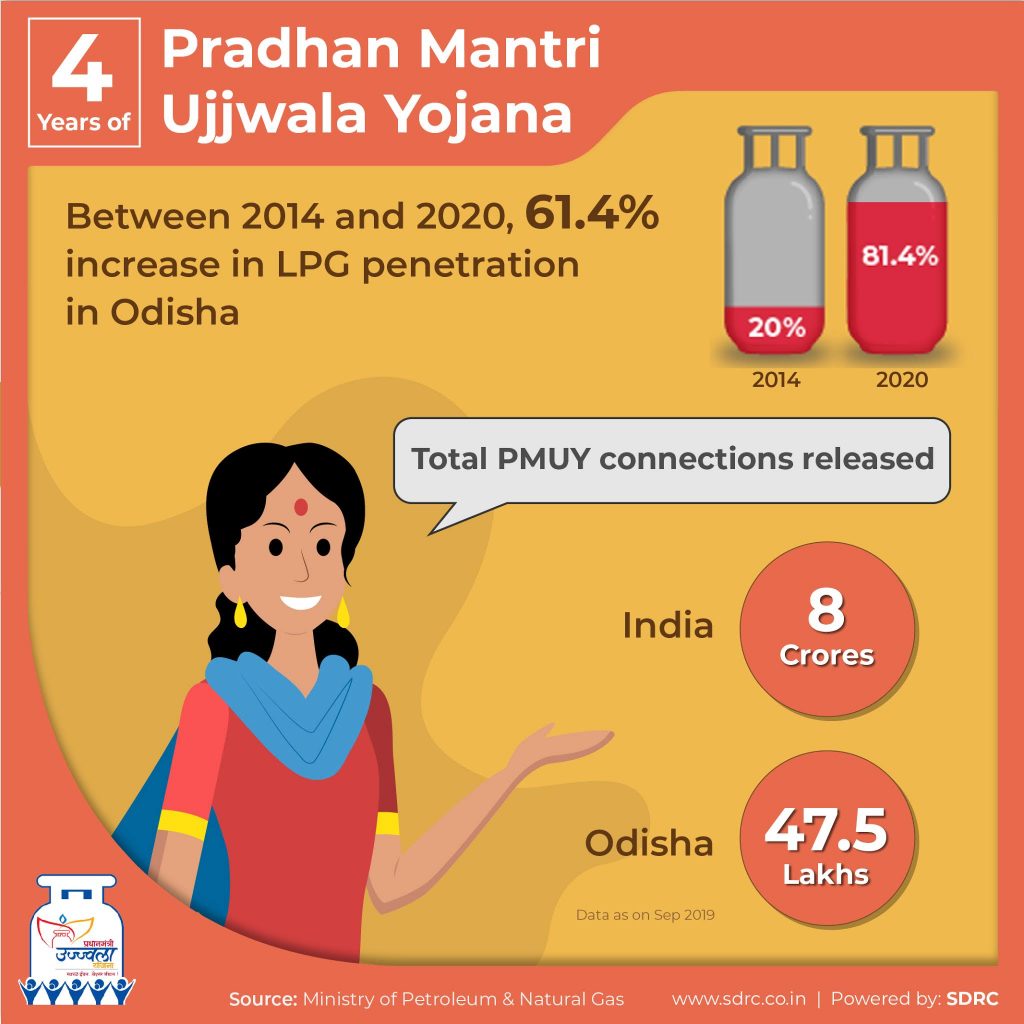 Just five years back, Shanti, a 48-year-old widow in Nimapara block of Puri district, used to suffer from chronic respiratory disease and frequent bouts of pneumonia. Despite that, she used to cook food in earthen stove and firewood, amid heat and smoke.

But her life changed for the better on May 1, 2016 when Prime Minister Narendra Modi launched Pradhan Mantri Ujjwala Yojana (PMUY) with a budgetary allocation of Rs 8000 crores. She was among the first beneficiaries in the state to receive cash assistance of Rs.1600 for a new liquified petroleum gas (LPG) connection and a loan on LPG stove. Since then, her health has considerably improved, and she now cooks wholesome food for her only child and teaches her to become a doctor.

Like Shanti, Odisha now has 47.5 lakh families who have been benefitted from the scheme, which aims to provide clean fuel to the poorest of the poor, empower women and protect their health from smoke and pollutants.

The vision for PMUY originated from the life experience of Honourable Prime Minister Shri Narendra Modi. As a child, he grew up witnessing his mother’s struggle with ill health due to smoke from the earthen stove. His resolve to wipe out the tears of his mother resulted in the ambitious scheme, which was effectively implemented by the Honourable Minister of Petroleum and Natural Gas Shri Dharmendra Pradhan. Under his leadership this program not only ensured a very high level of penetration, particularly among the backward and the economically weaker section, but also ensured that the target of eight crore connections was achieved well before the due date.

The scheme has benefitted more than eight crore households in the country. Under the central government’s economic response to Covid-19, each of them will receive gas cylinders free of cost under the Pradhan Mantri Garib Kalyan Package for the next three months.

Amid the pandemic and economic crisis, the scheme has proved to be a saviour for hundred thousand households in the state. Oil marketing companies in Odisha have started fund transfer worth Rs 341 crores as advance amount of first refill and delivered 5.88 lakhs free LPG refills to PMUY customers till April 14.

Four years ago, PMUY targeted to provide five crore LPG connections to below poverty line (BPL) households. However, it has come a long way since then:

The total number of PMUY beneficiaries were 47.50 lakhs, of which 19.32 lakhs belonged to SCs and STs.

How PMUY benefited people of this country?

Made their lives simpler and easier: The scheme simplified and eased the lives of the people, particularly women of the country and the state. It enabled them to cook food easier and faster than the previous method.

Saved them from harmful effects of indoor pollution: The indoor air pollution is the second biggest killer after high blood pressure in India and 800,000 premature deaths occur in India every year as a result of exposure to Household Air Pollution (HAP).

Reduced the reliance on wood and increased the state’s green cover: With people not going to unsafe areas to collect firewood and not cutting down trees, the scheme increased the green coverage in the state and the country. Odisha’s forest cover has recorded a marginal increase of 274 square km, from 51,345 square km in 2017 to 51,619 square km in 2019. Some of the gains can be attributed to the scheme.

What made the implementation of PMUY successful?

In March 2015, the central government launched the ‘Give It Up’ scheme to motivate well off LPG users to voluntarily surrender their subsidy and pay the market price. On April 23, 2016, 10 million people had voluntarily given up the subsidy, which made it one of the largest voluntary contribution schemes in the world! The surrendered subsidy was used to channel the benefits to poor families in rural households free of cost.

Shanti has already received the full retail selling price of the refill cost in advance for April 20 as well as the first free cylinder. She now spends less than one-hour cooking food and helps her daughter with her studies for most part of the day.