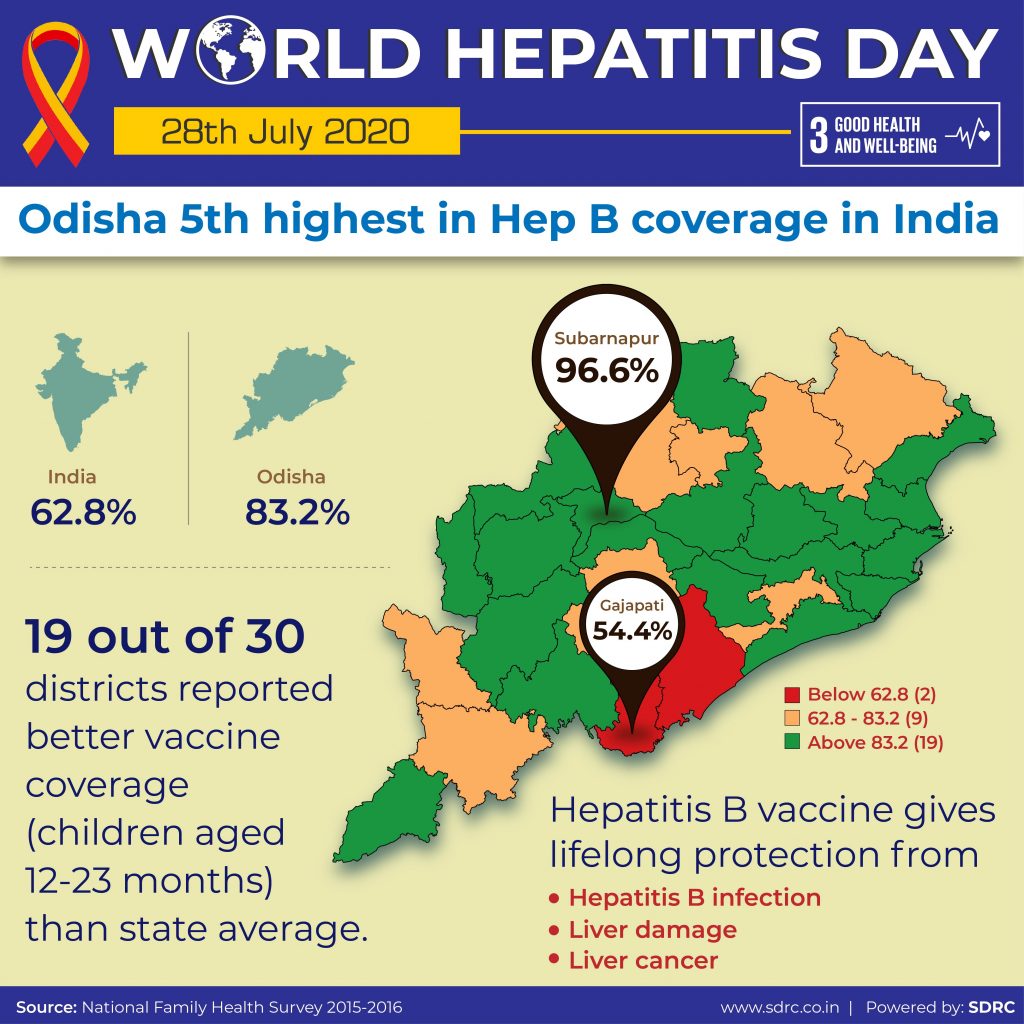 Hepatitis virus claims around 1.5 million lives across the world every year. An estimated 400 million people around the world live with Hepatitis. Of them, 290 million are unaware of their condition. Detection of Hepatitis at later stages makes recovery difficult leading to loss of life.

As per various projections, India has about three to six crores hepatitis B virus (HBV) carriers and the number of deaths due to the viral infection is estimated to be nearly one lakh per year. In 2014, New Delhi-based Institute of Liver and Biliary Sciences (ILBS) stated that about 600,000 patients die from HBV infection in India.

Of the five types of hepatitis virus – A, B, C, D, and E – the first two are vaccine-preventable, while the next three can be detected by regular blood tests and check-ups. A single shot of vaccination for Hepatitis A and B will provide immunity for at least 10 years, and most likely for a lifetime upon the completion of the entire course. Apart from preventing hepatitis A and B infections, the vaccines also protect against liver damage, liver cancer, and other health problems.

The theme of the World Hepatitis Day this year is ‘Find the Missing Millions’. The world health community is laying emphasis on massive scale-up in screening, diagnosis, and linkage to care to ensure early detection and save lives.

Where does Odisha stand in terms of hepatitis B vaccination coverage?

Odisha ranks fifth in Hepatitis B vaccination coverage among all Indian states and union territories. Per National Health and Family Survey (NFHS 2015-2016) report, 83.2% children between the age 12-23 months in the state have been vaccinated which is significantly higher than the national average (62.8%). At the district level, there is a noticeable disparity as Subarnapur (96.6%) tops in vaccination coverage while Gajapati (54.4%) reports lowest coverage.

National policies for Hepatitis B and Hepatitis C

The Union Government rolled out the Hepatitis B vaccine across 10 out of 22 states between 2007 and 2008 as part of the Universal Immunization Program (UIP). The program was made available across the entire country by 2011.

Under the UIP, the National Health Mission (NHM) mandates hepatitis B birth dose for all institutional deliveries within 24 hours of birth. To prevent postnatal transmission of Hepatitis B, three doses of Pentavalent (which contains HBV among its components) are mandatory at six, 10, and 14 weeks after birth.

In July 2018, the Union Government launched the National Viral Hepatitis Control Program with the aim of reducing morbidity and mortality due to viral hepatitis and ending it as a public health threat by 2030. Apart from providing free screening, treatment, and medicines, the program also focussed on preventive and promotive interventions as well as creation of awareness on immunization, sanitation and hygiene, infection control, safe drinking water, and sociocultural practices.