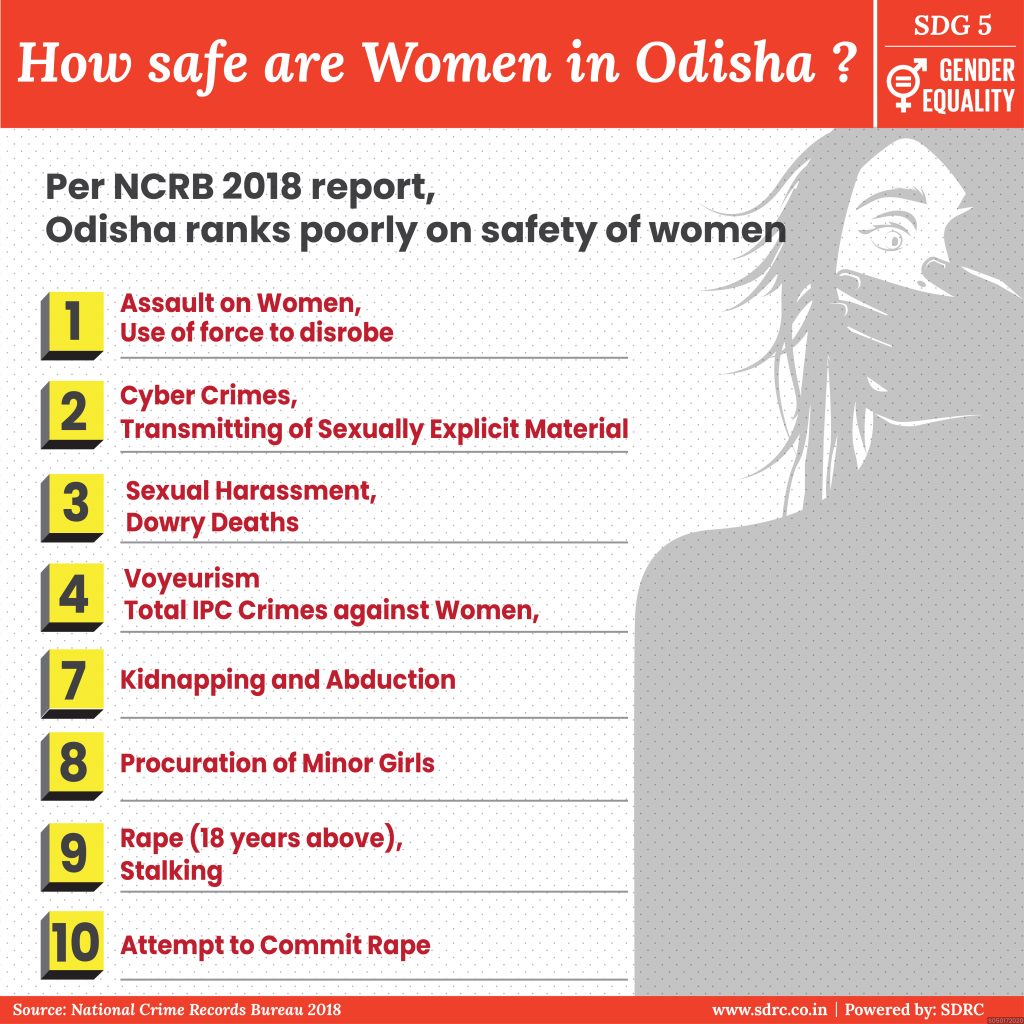 On April 21, 2018, Sadhana (name changed), a six-year-old girl in Salepur, went to buy some candies and never returned her home. Her brutalized body was found in a school premise the next day. With the perpetrator(s) still at large, the devastated parents await justice for the past two years, losing hope with each passing day.

Sadhana is not alone. Like her there are many in the state who have fallen prey to crime and violence in 2018. That pretty much sums up the status of women’s safety in Odisha.

What’s even more distressing is the state’s position in child pornography cases. With 333 such cases, it ranked top. The number of assault cases in the state is the highest with a rate of 44.9 per 100,000 female population, over three-times higher than the national rate of 13.8 per 100,000 female population. It ranked second in cybercrimes and transmission of sexually explicit materials.

It must be kept in mind that these are merely recorded official cases. Many victims shy away from registering complaints, while several cases don’t even get registered.

What steps the administration has taken to address the issue?

The state administration has rolled out several initiatives to strengthen safety of women and girl children, create awareness, deter crimes, expedite pending cases, and bring about behavioural changes among people. Some of them are listed below:

Fast-track Special Courts: With an aim to dispose several pending rape cases of women and children below the age of 12 years in various courts, Odisha has joined ‘fast-track special courts’ scheme under National Mission for Safety of Women.

Odisha State Commission for Protection of Child Rights: The Commission’s order is to ensure that all laws, programs, policies, and administrative mechanisms are in consonance with the Child Rights perspective.

However, with all these initiatives and policies the question remains whether these are adequate, or a lot more still needs to be done?

Odisha can learn from the initiatives taken by other states to prevent or deter violence against women. Some of them are:

UP’s Anti-Romeo Squads (or Nari Suraksha Bal): The implementation of anti-romeo squad by the Uttar Pradesh government has garnered mixed response from the public. However, if they remain true to their modus operandi of cracking down on eve teasers and harassers and preventing them from stalking, passing lewd comments and causing mental and physical harassment, the model is going to be successful in the long run. Zero tolerance should be the norm for dealing with such offenders and their advances should be nipped in the bud.

SURAKSHA-Bengaluru City Police app: The police force of India’s Silicon Valley leveraged cellular technology to ensure safety and boost the security measures for women in the city. A woman in distress can use the app as a personal safety device and send distress signals to police and family members or friends.

Haryana’s ‘Ek Aur Sudhar Programme’: Haryana government initiated this program to roll out one reform per month. Apart from this, the state police force has recruited women police personnel and set up women help desks in 38 subdivisions. The state has also purchased 50 vehicles for women police stations and implemented a pilot project of Mahila police volunteers’ scheme in Mahendergarh and Karnal to keep a vigil. Durga Shakti Rapid Action Force is set up at all districts to check the incidents of eve teasing.

The Uttar Pradesh State Commission for Women Act 2004: The commission was established to safeguard the interests of women and receive complaints on atrocities, deprivation, or non-compliance.

Stairya Yojane: Karnataka government launched this scheme to provide financial aid of Rs.25000 to women who are victims of various atrocities within 24 hours of lodging F.I.R. A maximum of Rs. 2 lakhs will be provided for extended medical relief for each case. Rs.1 lakh will be provided as death relief in case of death of victim due to rape atrocities and acid attack.

Maharashtra’s Manodhairya Scheme for Rape victims, Children who are victims of Sexual Offences and Acid Attack Victims (Women and Children): Under this scheme, the victims are provided shelter, financial assistance, medical and legal aid and counselling services. Financial assistance of Rs.1 lakhs and in special cases Rs. 10 lakhs. is provided to the victims.

Like this, there are many initiatives and schemes introduced by several state governments to safeguard women and girl children and Odisha can follow their example.

At the same time, it should be kept in mind that coming up with policies alone is not going to prevent or stop crimes against women. But their effective implementation can.