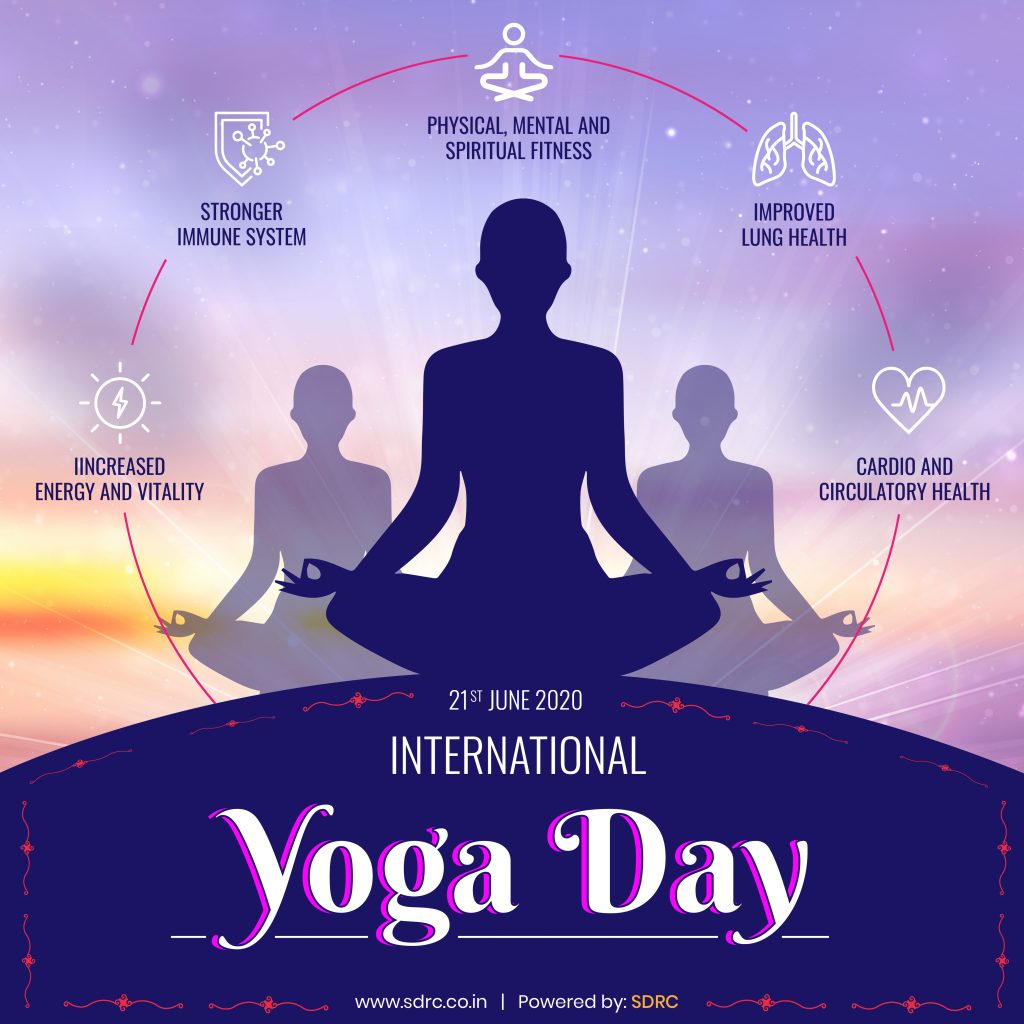 “From Haridwar to Hollywood, people have benefitted from yoga during the COVID-19 pandemic”, said our honorable Prime Minister Shri Narendra Modi in his monthly radio address ‘Mann ki Baat’ on May 31. The ancient science is good for community, immunity, and unity, he added.

As we celebrate the sixth International Yoga Day on June 21, we wake up to the news reports of more than 85 lakhs COVID cases and over 4.5 lakhs deaths. The good news, however, is that over 45 lakhs people have already recovered and many more are on their way to recovery.

Apart from medical intervention and proper diet, yoga and pranayam have played an important role in boosting immunity and recovery rate. Various studies and researches have proved that yoga is not just a form of physical exercise but also an ancient science that provides numerous benefits for mental, spiritual and overall wellbeing.

A research recently conducted by the University of South Australia found that yoga can significantly improve mental health and help in reducing depression and anxiety. Meanwhile, a couple of researchers from Wayne State University Institute of Gerontology and University of Illinois led 11 studies on yoga and brain health. They found that yoga is not only beneficial to brain function but also to a healthy body.

A research published in the Journal of Behavioral Medicine in 2018 revealed that yoga can be a helpful way to boost your immune system and decrease inflammation in the body. Four yoga postures can help in immunity boosting, they are – pranayama, Matsyasana (fish pose), Viparita Karani (legs up the wall), and Uttanasana (forward bend).

What are some effective and popular yoga practices around the world?

Some yoga postures have gained more popularity than others for their effectiveness to health and wellbeing. Here are some of them:

Surya Namaskar: The literal meaning of the practice is Sun Salutation, which incorporates a sequence of 12 gracefully linked asanas. Apart from being a great cardiovascular workout, it is known to have a powerful and positive impact on the body and mind.

Matsyasana: This is a back-bending and reclining asana, which is commonly considered a counterasana to Sarvangasana, or shoulder stand.

Halasana: This an inverted asana, when practiced looks like plough pose. It has some variations which include Supta Konasana, with the feet wide apart, and Karnapidasana, with the knees by the ears.

Bakasana: This balancing asana entails arm balancing poses in which hands are planted on the floor, shins rest upon upper arms, and feet lift up.

Adho Mukha Shvanasana: This inversion asana involves keeping hands and feet at roughly the same distance as they would be in plank.

Simhasana: Simhasana, or Lion Pose, is an asana that strengthens the lungs, throat, and human voice.

Shavasana: Also known as Corpse Pose or Mrtasana, this asana is used at the end of a session for relaxation. It is also the usual pose for the practice of yoga nidra meditation.

How can people with different physical abilities do yoga?

The ability to do certain yoga asanas or postures varies from person to person. One type may not be suitable for all and there are various types of yoga for people with different physical abilities.

Yoga for seniors: Some yoga postures are the easiest and one of the few physical exercises one can continue as they age. Some best yoga poses for seniors are – Adho Mukha Shvanasana, Simhasana, Mountain Pose, Tree Pose, Bird Dog, and Savasana.

Yoga for pregnant women: Apart from healthy diet and prenatal care, yoga and meditation can be extremely beneficial for pregnant women. But there are only a few yoga poses they can practice in a comfortable and safe manner. As per a blog post on the Art of Living website, some of the best ones are marjariasana, konasana, veerbhadrasana, trikonasana.

Yoga for children: Yoga can enhance coordination, flexibility, and strength of children, promote calmness and mindfulness and reduce their anxiety and stress. Some of the recommended yoga asanas are Natarajasana, Padmasana, Pincha Mayurasana, Dhanurasana, and Vrksasana.

Yoga for busy professionals: Many working professionals, freelancers, entrepreneurs, and C-suite executives have unusually tight schedules. Even though they need yoga to increase their productivity and keep their stress level at bay, few of them can rarely give more than a few minutes for yoga practices. For them some quick but extremely effective asanas are Padmasana, Nadi Shodhana Pranayama, and Bhujangasana.

Yoga for athletes and fitness enthusiasts: With closure of gyms and fitness centers, athletes and fitness enthusiasts are among the people who have been worst affected during the lockdown. Even with the first phase of unlock, reopening of those establishments will still take time. Fortunately, there are some high intensity yoga asanas for this group of people to help them stay in shape and enhance their endurance, agility, and strength. Some of those are power yoga, plank, and kapotasana.

To celebrate the ancient science that focuses on holistic development, our honorable Prime Minister suggested the International Yoga Day be observed every year on June 21 – the summer solstice and the longest day of the year.

How you can celebrate International Yoga Day 2020

The theme of this year Yoga Day is ‘Yoga from Home, Yoga with Family’. The Ministry of AYUSH and the Indian Council for Cultural Relations have launched a video blog competition under the hashtag #mylifemyyoga.

While the winner will get an award of Rs 1 lakh, the runner-up and second runner-up will get cash prizes of Rs 50,000 and Rs 25,000 respectively.

You can practice yoga from your home with your family from 7 am to 7.45 am by following the ‘Common Yoga Protocol’ (CYP). The CYP is available on the yoga website http://yoga.ayush.gov.in/ and it will be played on various TV channels in the run up to the International Yoga Day.

The common guidelines before, during and after performing yoga are listed along with the recommended exercises.