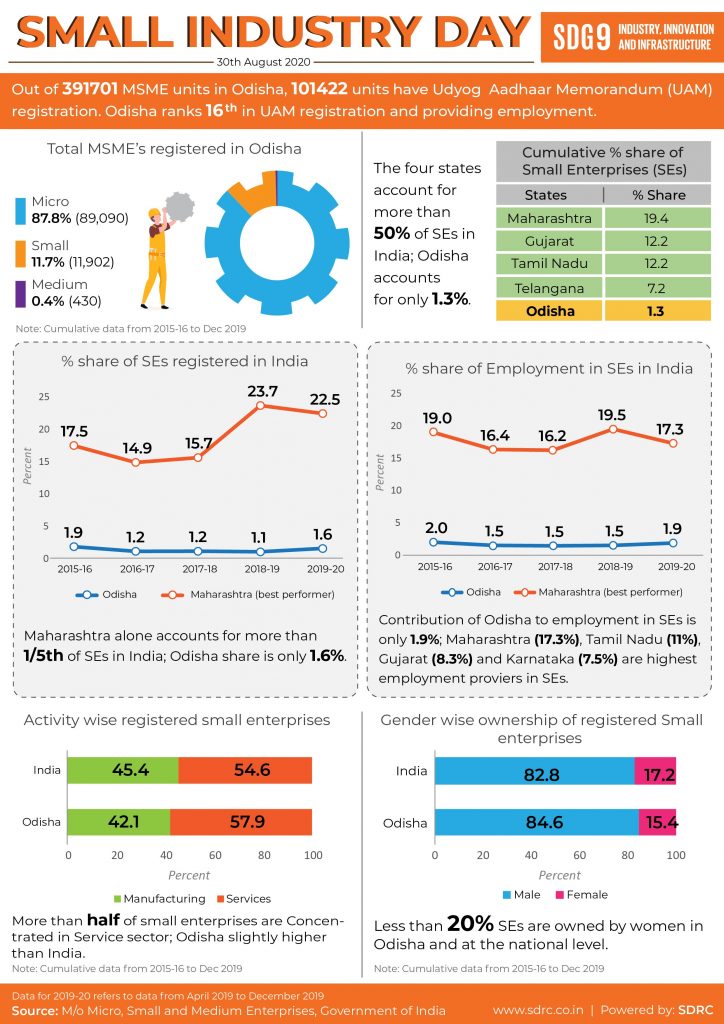 Small-scale industry plays a big role in a country’s economic development. Though it lacks the economies of scale and efficiency of a big organization, it employs more people per lakh rupees and generates higher employment opportunities.

On August 30, 2000, the former Indian Prime Minister Shri Atal Bihari Vajpayee announced an extensive policy package to develop and promote small-scale industry. Since then, the date is observed as the National Small Industry Day every year.

On the 20th National Small Industry Day, we highlight the importance of small industries in Odisha.

Why are small enterprises (SEs) important to Odisha?

To create more jobs: As per a survey conducted by the Centre for Monitoring Indian Economy (CMIE), Odisha’s unemployment rate stood at 9.6% in May 2020. SEs have the capacity to create higher employment opportunities and provide jobs to skilled, semi-skilled, and unskilled workforce.

To reduce migration of the working population: Many people from Odisha migrate to states like Maharashtra, Tamil Nadu, Karnataka, Kerala, and Gujarat for jobs and livelihood. Apart from other sectors, these states have a higher number of small-scale enterprises and MSMEs, which provide employment to the majority of workers.

Status of SEs in Odisha

The state ranks 16th in UAM registration and providing employment among other states and union territories. The proportion of employment in Odisha’s SEs compared to the national average is below 2%. The highest employment providers in SEs are Maharashtra (17.3%), Tamil Nadu (11%), Gujarat (8.3%), and Karnataka (7.5%).

In 2019-20, Maharashtra alone accounted for one-fifth of total SEs registered in the country, while the contribution of Odisha was only 1.6%.

When it comes to gender-wise ownership of SEs, both national and state averages are under 20%. However, Odisha is slightly lower with 15.4% SEs owned by women, while the national average stands at 17.2%.