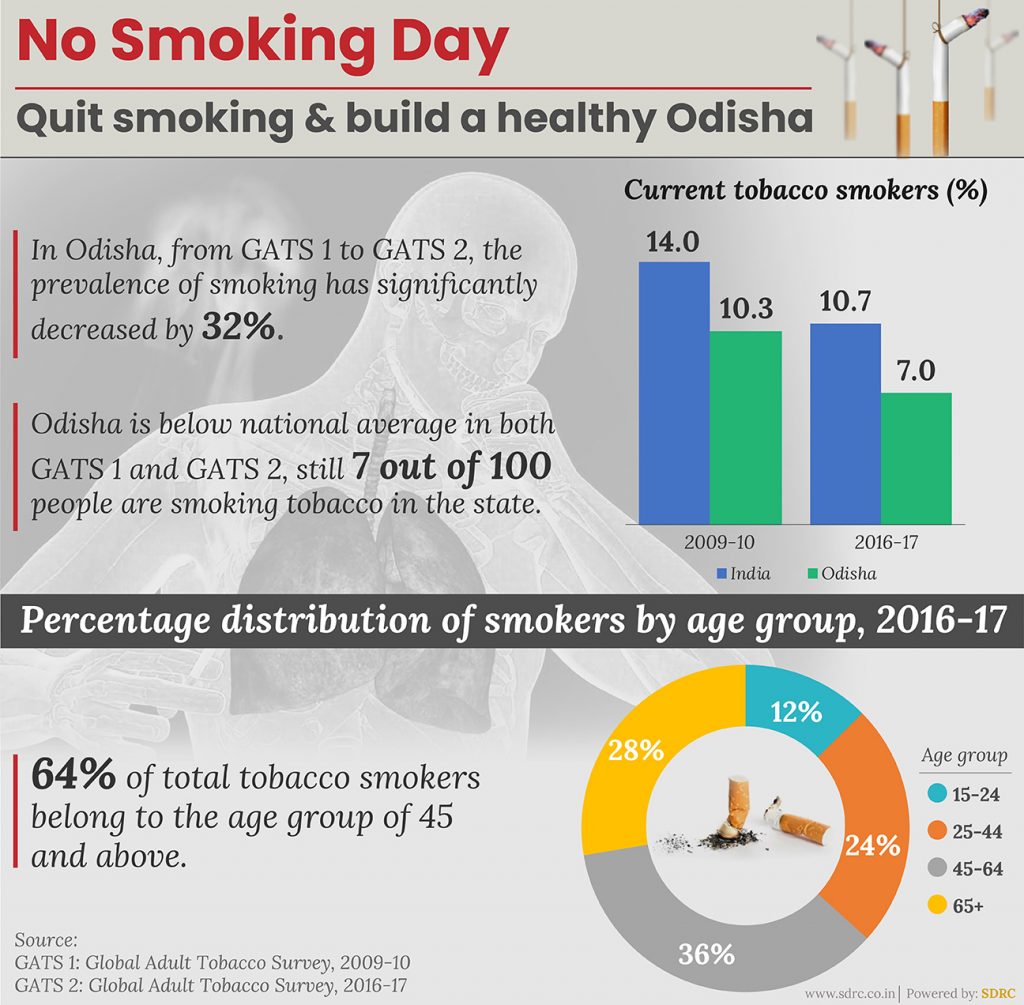 Addiction to smoking is one of the worst things that can happen to someone. It kills slowly and steadily. Just one cigarette shortens one’s life expectancy by 11 minutes and is bad enough to start the habit. It causes serious health conditions such as heart disease, stroke, several types of cancer, pneumonia, bronchitis, among others.

What is the prevalence of smoking habit in Odisha?

In the six years, the prevalence of smoking considerably decreased by 32%.

However, it is a matter of concern when seven out of 100 people are still smokers in the state.

What is the percentage distribution of smokers by age group?

It’s a matter of concern that about six out of ten smokers belong to over 45 year of age, while over three of them are in the age group of 15-44 years.

What is No Smoking Day?

No Smoking Day is observed every year on the second Wednesday of March in communities around the globe. Since its inception in 1984, it creates awareness and highlight on the available resources to help smokers quit.

Every year, the day is given a new theme in the form of a short phrase to be used in advertising and media to reach out to a greater number of people.

One of the most effective campaigns of all time was conducted in 2009. The post-campaign research conducted by GfK NOP found that 1 in 10 smokers quit on that very day.

Some Interesting facts about No Smoking Day

The theme in 2010 was ‘Break free’, which encouraged smokers to escape from the shackles of cigarettes.

If you smoke, the best thing you can do on this day is to quit.

You can also celebrate the day by creating awareness among people who smoke and providing them with the available resources that can help them leave the habit. There are helplines, support groups and counsellors who can just talk and listen to them.

Many insurance firms have dedicated programs and would be glad to help.

What initiatives the government has taken to reduce smoking among people?

The Indian Government enacted several laws and tobacco control measures. They are:

Cigarettes Act (Regulation of Production, Supply and Distribution): It was enacted in 1975, under which the statutory warning ‘cigarette smoking is injurious to health’ was compulsorily displayed on all cigarette packets, cartons and advertisements.

Cigarettes and Other Tobacco Products (Prohibition of Advertisement and Regulation of Trade and Commerce Production, Supply and Distribution) Act: The passed the act in 2003 after adopting the WHO Framework Convention of Tobacco Control (FCTC).

National Tobacco Control Programme (NTCP): It was introduced by the Ministry of Health and Family Welfare in 2007- 08 with an aim to bring about greater awareness about the harmful effects of tobacco use.

The Cigarettes and other Tobacco Products (Packaging and Labelling) Second Amendment Rules, 2018: It mandates the inclusion of words “TOBACCO CAUSES CANCER”, “QUIT TODAY CALL 1800-11-2356” and two images on cigarette and tobacco products packets.

On this No Smoking Day 2020, let’s pledge for a smoke-free Odisha.