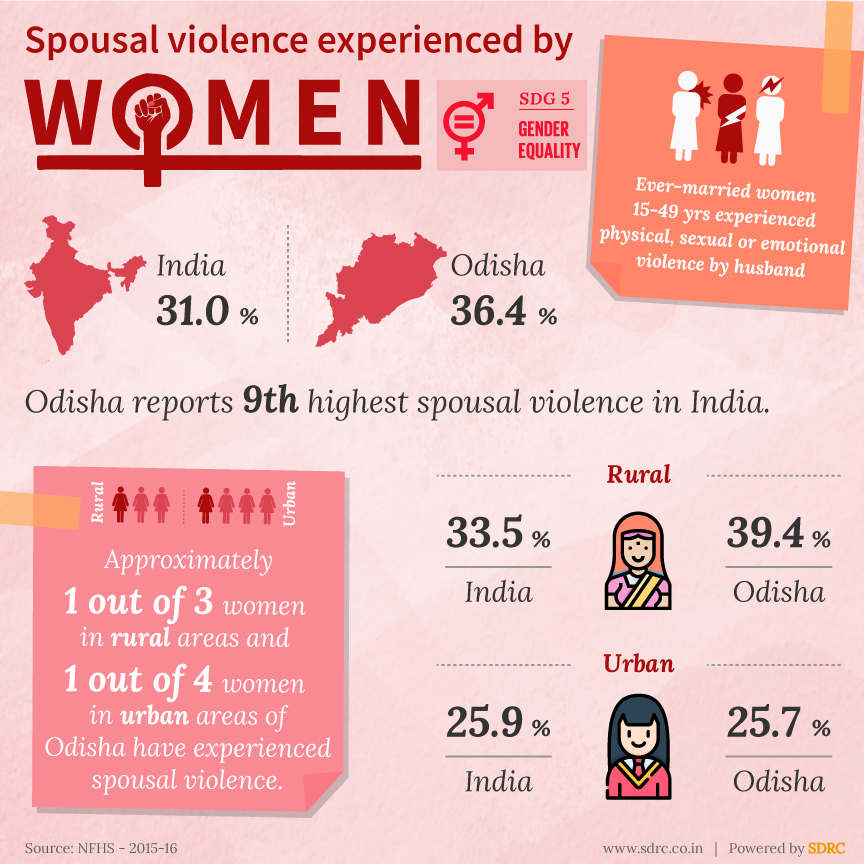 Like every day, Radha (name changed) woke up and went about her daily chores. Her husband then demanded money for liquor. Money was tight, essential items were depleting fast and the lockdown got extended. Spending money on liquor was not an option. She refused and faced the wrath of her husband.

Spousal violence is a matter of grave concern in Odisha, even more amid the nationwide lockdown. Women with a history of violence from their husbands are more vulnerable. With less work and depleting resources, their abusive husbands are more likely to take it out on them.

As per the NFHS 2015-16 data, Odisha ranks ninth in terms of spousal violence among all states and union territories. One in three women in the state has suffered spousal violence. The number is the same in rural areas. In urban areas, one out of four women experience physical, emotional, or sexual violence from husband.

The number is even higher, as many victims never disclose their ordeals even to their closest family members or friends fearing apathy or criticism from them and the society.

Spousal violence comes with a huge personal and social cost and tears lives apart, especially of the victims and their children. Here are some of its devastating effects:

Impact on family: Household conflict and violence cause fear and destroy family environments. Children growing up in a violent environment develop psychosis and trauma and do not learn about positive and healthy relationships.

Long-term impacts on survivors: Spousal violence survivors are likely to face several challenges after suffering abuse from their husbands. Even more in rural and conservative parts of the country where divorce or staying separated from one’s husband is a taboo.

What the government is doing to curb spousal violence?

The Odisha government and the police department have launched a slew of initiatives and measures to curb domestic and spousal violence amid the lockdown. Some of them are:

Phone-up program: Odisha Police has set up a state-wide call centre at the State Crime Records Bureau (SCRB) to contact victims of domestic violence. Police have identified complainants and have started contacting them to know about their well-being. A physical verification follows immediately if something appears to be wrong.

WhatsApp numbers: The state government launched a WhatsApp number – 7205006039 – to report domestic violence cases during the lockdown. Also, the Odisha State Commission for Women (OSCW) has issued a WhatsApp helpline number – 8763543013 – to address issues related to violence against women.

The police department has called up more than 5,700 victims of spousal violence over the past few weeks. Of them, only one per cent faced violence at home.

Dr. Sudhansu Sarangi, IPS, Commissioner of the Bhubaneswar–Cuttack Police Commissionerate said, “Unlike the Western world, we have a more stable family system. Many families live in joint families, divorce rates are lower, and children are not living with stepparents. The situation is much better.”

However, despite the low number of cases, there still lies a danger of fresh spousal violence cases, even with no past history. That is because of:

What can you do to prevent spousal violence in your locality?

Staying home you can keep your family and your neighbors safe by:

Remaining alert: If you observe or sense any violent behaviors in your neighboring houses, remain alert and ask if they need any help.

Looking out for the signs: A domestically abused person is more likely to remain aloof and shocked. A victim is also likely to show unusual behaviors and act a little strange.

Offering help: If they tell you that they are suffering from abuse, listen attentively and prepare to help them.

Checking in regularly: If a neighbor is in danger, call or pay a visit to ensure that they are safe.

Noting down the details: Note every detail you witness and mention the location, date, time, and circumstances. The information will be useful in later police reports.

Upon hearing abuses, one of Radha’s neighbors informed the police control room and a van arrived within a few minutes. The team barged inside the house and overpowered the man. They took the statement of Radha, who was shell shocked but fortunately not injured. After that, they cuffed the man and took him to the police station.

However, cases like this are now rare in the state. Crime against women, including spousal violence, have dropped significantly during the lockdown. To quote Dr. Sarangi, “Reporting of incidence of domestic violence has come down indicating a strengthening of family bonds in the face of an unprecedented threat to human existence. In fact, as a student of psychology I am not surprised by the outpouring of altruistic feelings across society.”