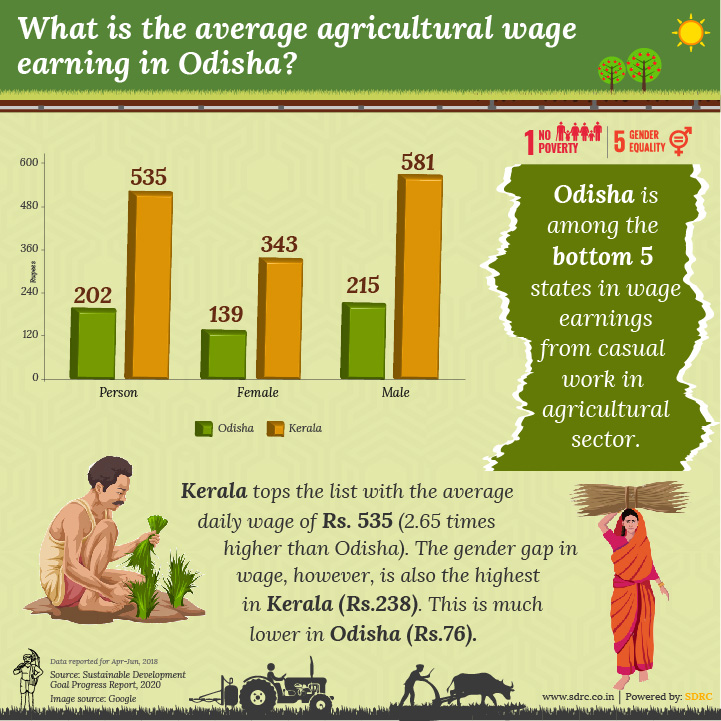 After 12 hours of hard work in a vegetable farm, Mihir, a farm worker based in a remote village in Kendrapara district, gets a daily wage of Rs. 200. Like him, there are more than seven lakh landless farm workers in Odisha who struggle to make ends meet.

Odisha’s agriculture sector continues to be a low productive sector. Despite employing more than 60% of the state’s total workforce, it contributes about 26% to the gross state domestic product. The reasons associated with low productivity are:

As per National Sample Survey Office’s Periodic Labour Force Survey 2017-18, an average farm worker in Odisha makes Rs. 202 per day. Odisha remains among the bottom five states and union territories (UTs) in wage earnings from casual work in the agricultural sector. The average daily wage of a male worker is Rs. 76 higher than his female counterpart – a male worker makes Rs. 215, while a female worker makes Rs. 139.

The huge disparity in wages among states often results in the migration of unskilled and semi-skilled agricultural workers from the low-wage states to the high-wage ones.

How farm productivity and small farmers’ income can be enhanced?

There is a dire need to improve the farm productivity and increase the income of farmers in the state. Some of the ways to achieve that are:

Greater thrust on micro irrigation projects: Odisha, being the third most rainfed state in India, needs conservation and proper use of the seasonal rainwater for higher yield. Facilities such as micro irrigation systems and rainwater harvesting techniques will produce better results for farmers.

Government initiatives for the farming community

Both the Union and the State governments have taken several initiatives to increase the income and productivity of the farm sector. Some of them are:

Ordinances by the Union Government: On June 5, the central government promulgated three ordinances. The first Ordinance entitles agriculturists and traders to continue trade in agri produce outside a licensed Agricultural Produce Market Committee market. The second one establishes a framework for formalizing contract farming and the third one defines the limited circumstances under which the supply of agricultural produce may be regulated under the Essential Commodities Act.

Amendment of Essential Commodities Act: The Union Cabinet deregulated food items and removed cereals, pulses, oilseeds, edible oils, onion, and potatoes from the list of Essential Commodities Act. The aim of the move is to achieve economies of scale, attract foreign direct investment and private players into the farm sector, boost investment in cold storages, and modernize the food supply chain.

Apart from the commendable initiatives in the recent past, the agriculture sector can benefit immensely from some more measures taken by the state government. Thereby it can increase farmers’ income as well as the minimum wage of landless farm workers.

As the rural population accounts for over 70% of the globe’s extreme poor, agriculture can help in poverty reduction and meeting the target of Sustainable Development Goal 1 – no poverty – than any other sector.