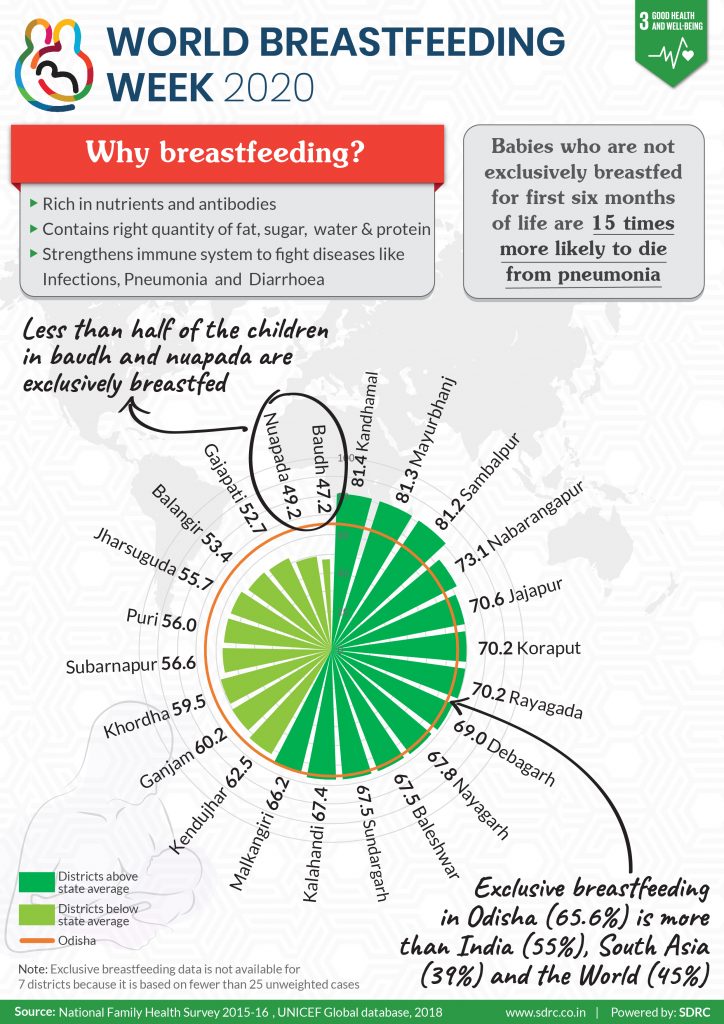 Exclusive breastfeeding from the birth of a child to the next two years is crucial to combat malnutrition. Early initiation of breastfeeding:

World Breastfeeding Week is celebrated every first week of August to promote exclusive breastfeeding for the first six months of birth and raise awareness on its benefits. This year’s theme is “support breastfeeding for a healthier planet” and precautionary measures for the global pandemic.

Status of breastfeeding in India and Odisha

Although exclusive breastfeeding during the first six months compared to within an hour of birth increased in India to 54.9%, it dropped to 65.6% in Odisha. Less than half of children are exclusively breastfed in two districts of Odisha – Baudh and Nuapada.

Some challenges associated with breastfeeding

Nutritional and health status of a mother: A mother who is anaemic with inadequate nutrition or underlying health causes may face several problems while breastfeeding. More than half of Odisha’s women population is anaemic.

Wrong beliefs associated with colostrum: Colostrum, also called ‘babies first vaccine’, is the first milk secreted by a woman at the time of childbirth. It has the vital nutrients and components to build immunity and prevent various illnesses. In many cultures, however, mothers are advised to avoid feeding baby colostrum because of the wrong beliefs attached to it.

Need for support: Though breastfeeding is a natural process, mothers need support to initiate and sustain breastfeeding. They experience various barriers, which could be emotional, health related, personal, or even financial. Young mothers may shy away from feeding their kid due to lack of confidence, embarrassment, and other emotional causes.

National Breastfeeding Promotion Programme – MAA: The Indian government launched a National Breastfeeding Promotion Programme, under the name of mothers’ absolute affection (MAA) to ensure awareness among all, particularly mothers, on the benefits of breastfeeding. Under the program, nurses in government hospitals, Auxiliary Nurse Mid-wives (ANM), and Accredited Social Health Activists (ASHA) have been trained to provide counselling support and key information to mothers for breastfeeding.

The Pradhan Mantri Surakshit Matritva Abhiyan: Launched by the Ministry of Health & Family Welfare (MoHFW), the program aims to provide assured, comprehensive, and quality antenatal care, free of cost, universally to all pregnant women on the 9th of every month. PMSMA guarantees a minimum package of antenatal care services to women in their 2nd / 3rd trimesters of pregnancy at designated government health facilities. In 2019, Odisha emerged as one of the top five states to benefit from the program as 8,702 women received free ante-natal care in that year alone.

IAP HealthPhone: In June 2018, the Women and Child Development Ministry launched the ‘IAP HealthPhone’ program to spread awareness about breastfeeding and the importance of a balanced diet.

What are the best practices around promotion of breastfeeding?

Breastfeeding Rooms in Tamil Nadu’s Public Places: In 2018, Tamil Nadu launched more than 300 breastfeeding rooms in public spots like the Chennai Mofussil Bus Terminus (CMBT). Each air-conditioned room can be used by eight mothers at a time. To help mothers, the state government also appointed nurses in the rooms.

PMCH’s special room: The Patna Medical College and Hospital (PMCH) has created a special room to enable its staff to breastfeed their infants while on the job. Apart from that, the hospital is also looking to implement the six-month maternity leave rule.

Tamil Nadu’s phone helpline: Not all mothers have access to specialized assistance and facilities. Considering this, the Tamil Nadu government has launched a phone helpline to support breastfeeding and educate women in rural areas. Through that, they can receive advice on nursing, nutrition and seek support on their babies’ health.