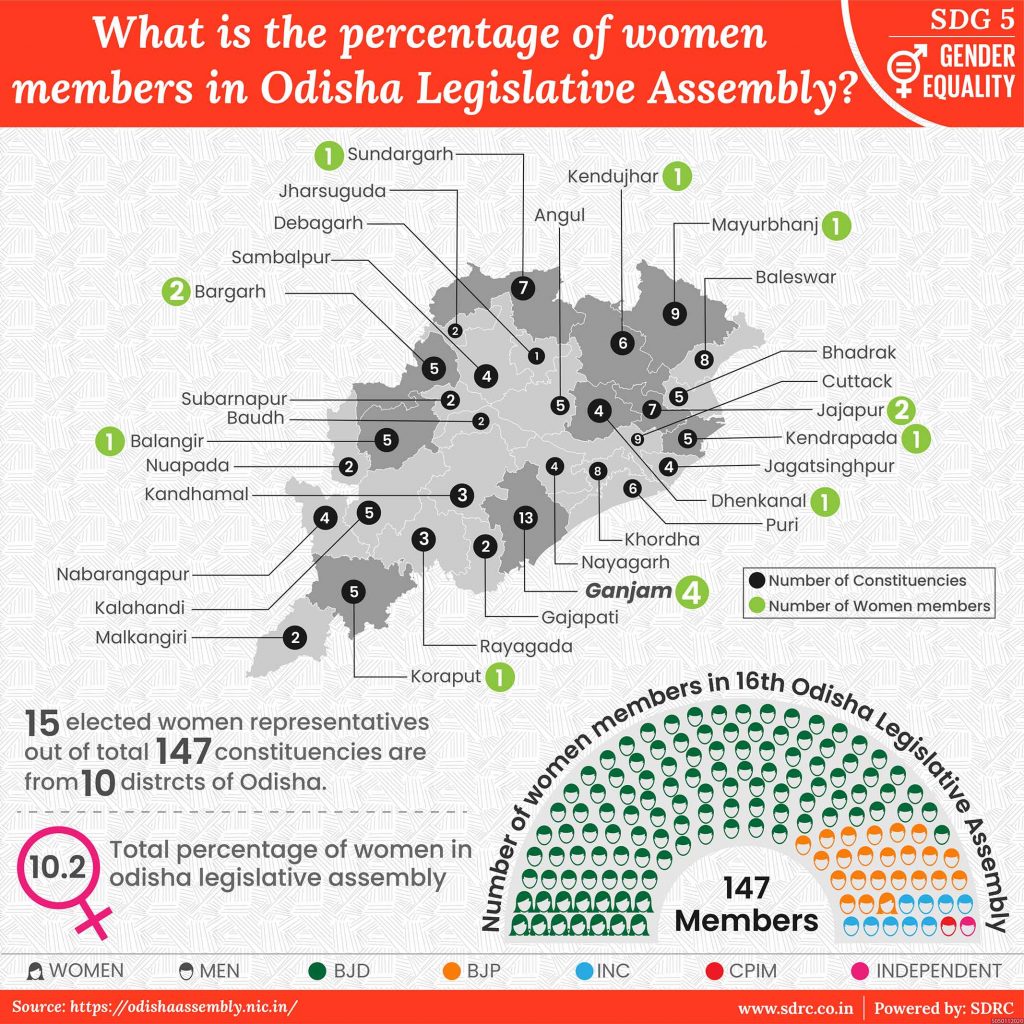 Participation of women in politics not only promotes gender equality but also diversity. A Korn Ferry Hay Group study conducted in 2016 revealed that women fared better than men in inspiring action, persuasion, mentoring, leadership, and adaptability.

However, despite all these attributes, their participation in Indian politics is extremely low.

How many women MLAs in Odisha?

Presently, the 147-member Odisha Legislative Assembly has 15 women members (10. 2%). The shocking fact is that out of 30 districts, only 10 account for all elected members.

With 4 women MLAs, Ganjam accounts for the highest number of seats, followed by Bargarh and Jajapur – 2 each. Koraput, Dhenkanal, Kendrapara, Mayurbhanj, Kendujhar, Sundergarh and Balangir contribute one seat each.

Odisha ranks eighth in terms of percentage of women representation.

Haryana and Chhattisgarh rank top with 14.44%. Out of total 90 MLAs in their respective assemblies, 13 are women.

Delhi, after recently concluded assembly elections, ranks 6th with 8 women MLAs out of 70 seats, giving it a percentage of 11.4%.

Jharkhand ranks 7th with 11.11% women in its legislative assembly. Nine out of 81 MLAs are women.

Uttar Pradesh ranks 9th with 10.17% women in its assembly. Out of 403 total seats it has 41 women MLAs, the highest in the country.

Mizoram and Nagaland rank the lowest with no women MLAs in their legislative assemblies.

What the state government is doing about it?

On November 20, 2018, the Odisha assembly passed a resolution proposing 33% reservation for women in the Parliament and the assemblies by a vote voice.

In March 2019, just before the state elections, Odisha CM Naveen Patnaik announced that his party BJD (Biju Janata Dal) will reserve 33% seats for women in the allocation of Lok Sabha tickets to the parliament.

What can be done to improve the situation?

Reservation: It’s high time that every state assembly set aside 33% of total seats for women candidates.

Encouragement and mentoring: Political parties and the society must create an encouraging environment that will inspire women to be in politics. Senior and experienced politicians should also mentor women in their parties to be efficient and effective.

Cleaning up the system: It’s no secret that a few dubious elements exist in some political parties. They must be ousted, and the credibility of all members must be verified to determine they can get along and work well with women politicians, bureaucrats and party workers.

Such steps are necessary not just for the sake of gender equity but also for good governance. If Odisha adopts these, it will mark a significant change.