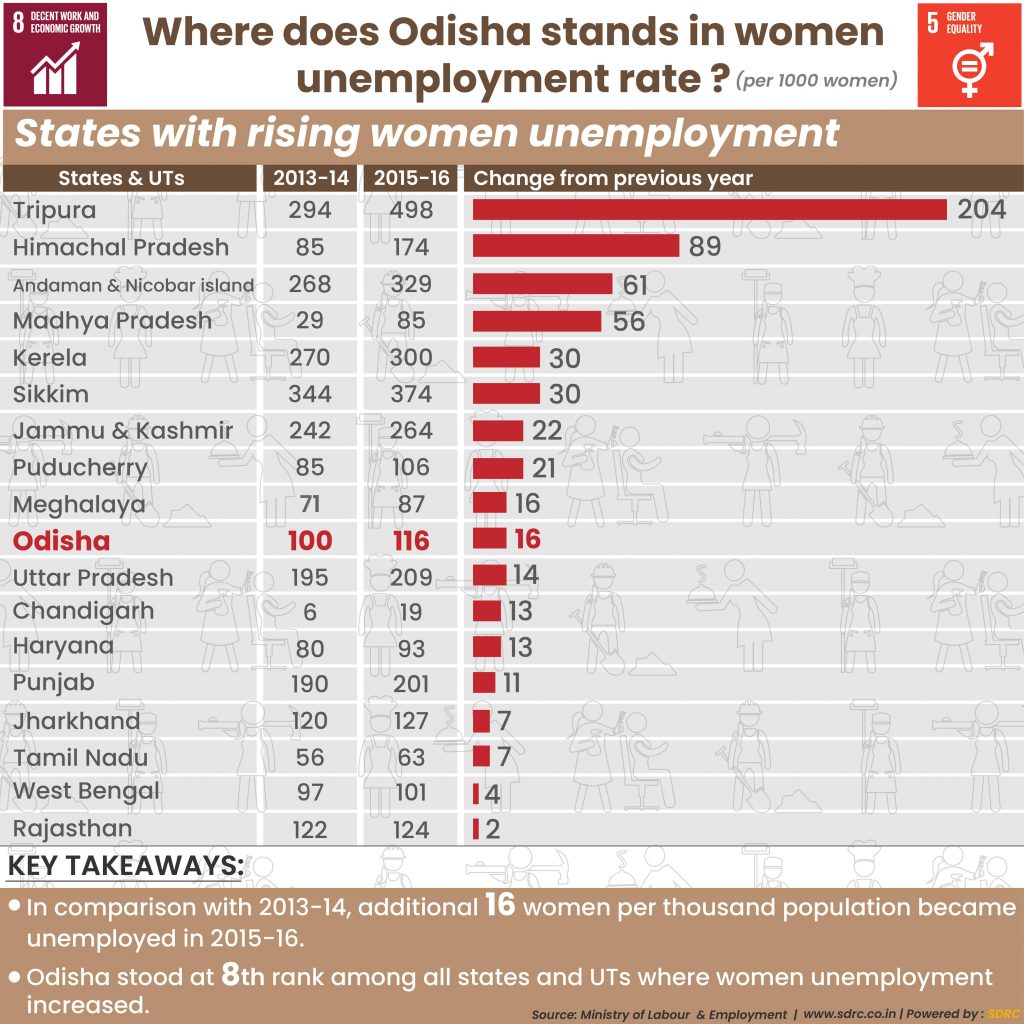 Soft spoken, hardworking, and skillful Archana is a 25-year-old B-Tech graduate from KIIT University. It’s been over two years she passed all papers with distinction. But she hasn’t been able to find a job as per her capabilities and qualifications. Even though she got some calls from a few private firms, the salary was extremely low. She is still waiting for a good offer, but losing hope with each passing day.

Sagarika, a 28-year-old finance graduate from Utkal University, has been preparing for a government job for the last six years. With her hard work, she managed to get good marks in a civil servant exam and appeared the interview. But to her shock, she wasn’t selected for the position notwithstanding a good performance. Now, she is depressed as no private company is willing to give her suitable work and salary as per her capabilities.

Like Archana and Sagarika, there are many women in Odisha who are unemployed despite their qualifications, skills and willingness to do work.

When some people don’t get the right job according to their capabilities, it is a sheer waste of their talents and potential. As William E. Barret said, “hunger is not the worst feature of unemployment, idleness is.”

How Odisha compare with other states and UTs?

There are 16 states and UTs where women unemployment has increased in absolute value. Odisha ranks 8th among them.

Tripura tops the list with an increase of 204 unemployed women per 1000 females in 2014-15. Himachal Pradesh ranks 2nd and Andaman and Nicobar Island ranks 3rd.

Why unemployment among women increasing in Odisha?

Here are some probable reasons why unemployment among women is on rise in Odisha:

Lack of jobs: Employment opportunities in the private sector is far less compared to other states such as Andhra Pradesh, Telangana, Karnataka, Tamil Nadu, Uttar Pradesh, among others. The vacancies in government sector is also less and competition is high.

Lack of suitable employment opportunities for women: Out of few jobs in the state, there are far less suitable opportunities for women. Many of them are blue-collared and labour-intensive work that prefer the service of male workers. Jobs in construction, transport, security, sanitation, and such sectors look mostly for men workers.

Lack of suitable skills: Even though many professionals (both men and women) are highly educated, few of them have adequate skills that make them suitable for the available jobs.

Family problems: There are some women whose husbands, parents or family members prohibit them from doing a job. Some educated and professional women with children may forgo their career to look after their family.

Gender based stereotypes: Some employers still consider male employees are more energetic, passionate and dedicated compared to their female counterparts. If they have to choose between a male and a female professional with same qualifications, skills and experience applying for the same post, they are more likely to select the former.

Toxic work culture: Toxic work culture is rampant in some firms which drive some women employees to quit without getting a new job. Office politics, nepotism, bribery, favouritism, bullying, and discrimination can affect their mental health and force them to leave.

What the government is doing to address the issue?

Both central and state government have launched some initiatives to increase women’s employment. Some of them are:

Skill India: It is a campaign under National Skill Development Corporation that aims to impart skill-based training to youths.

Annapurna scheme: The Central Government is providing loans up to Rs. 50,000 to women entrepreneurs in food catering business. The amount could be used for working capital expenses such as buying appliances and raw materials.

Mission Shakti Odisha: This Odisha government initiative aims to provide livelihood to women and empower them through Women Self Help Groups (WSHGs). It has various schemes and loans to make women self employed and collaborate with other female folks to create value in their community.

Stree Shakti Package: It is a State Bank of India-run scheme to support entrepreneurship among women by providing certain concessions.

Biju Atma Nijukti Yojana: It is a scheme under which the state government aims to provide loans to aspiring women entrepreneurs.

There are many states who have launched several schemes to reduce unemployment among women. Some of them are:

Kayaka Yojana Loan Scheme: This scheme was launched by the Karnataka government to encourage skill development through self Help groups (SHGs). Under this Scheme, the state government will provide loans up to Rs 10 lakh to these SHGs from cooperative sector banks.

Telangana Nirudyoga Bruthi Scheme: It is an initiative of Telangana government to provide financial assistance to the unemployed women and youth of the state.

Mahila Vikasa Kendrams: Andhra Pradesh government launched these centres on nominal rent basis for women who have entrepreneurial skills but lack the funds to set up their own units.

The state should seriously look for ways to reduce unemployment among women. No matter however small the number may look, it is a matter of grave concern for an individual and their family.

In his book ‘The World is Flat’, three-time Pulitzer Prize winning author Thomas L. Friedman rightly remarked, “when you lose your job, the unemployment rate isn’t four per cent, it’s 100 per cent.”