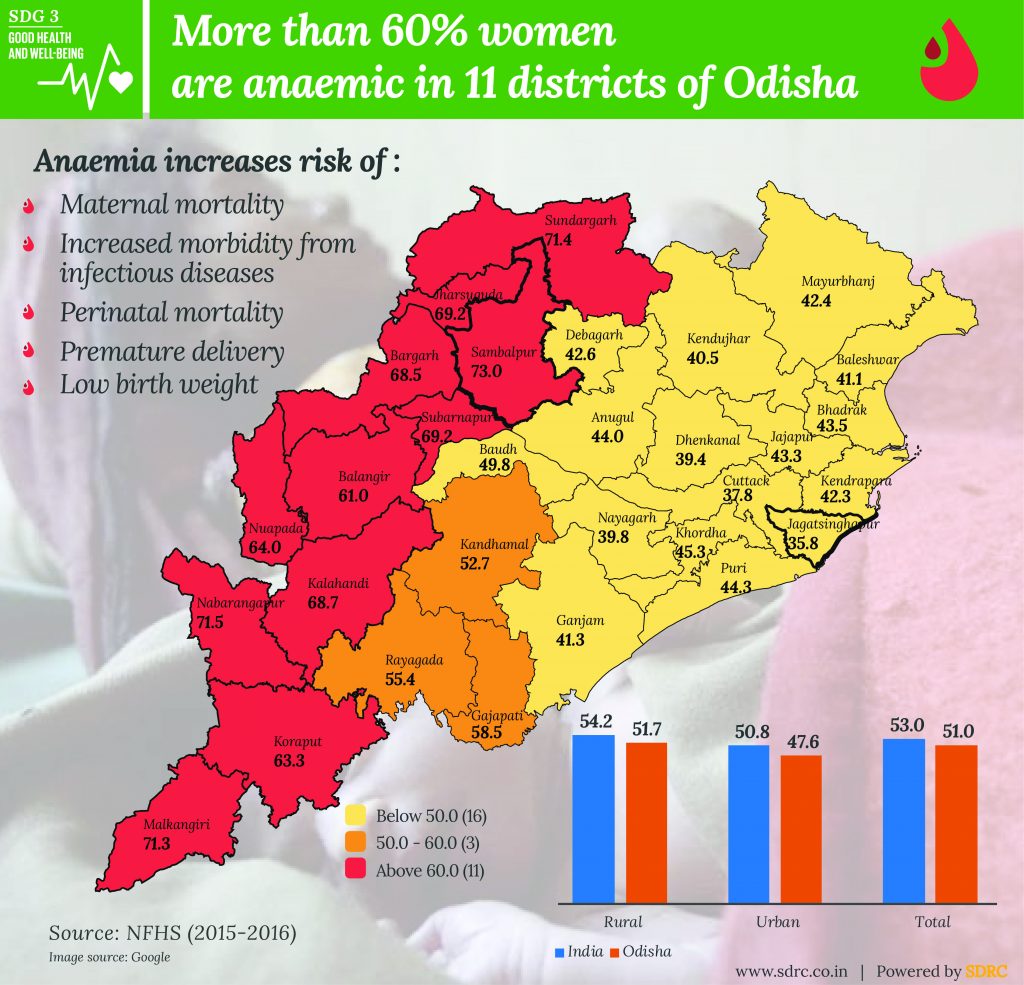 When twenty-five-year-old Arati (name changed) started having labour pains just five months into her pregnancy, she knew something was wrong. A few weeks ago, she felt a sharp pain in her upper rib and had sleepless nights since then. Her mornings were marred by constant fatigue and frequent bouts of nausea.

She ignored the pain and exhaustion, and so did her in-laws. For an expectant woman, her diet was extremely frugal consisting mainly of watered rice, a pinch of pickle, and a boiled potato seasoned with green chili and salt.

When the pain intensified, she was rushed to the nearest community clinic. After some checks, she was diagnosed with severe iron deficiency and low blood count. Injecting couple of iron and vitamin B-12 shots, the doctor referred her to the city hospital for blood transfusion. However, it was too late till she reached. She couldn’t survive, neither could her stillborn daughter.

The condition that took her life was anaemia, a disorder in which a person lacks adequate healthy red blood cells and enough haemoglobin. With insufficient oxygen reaching body tissues, it makes them feel weak and tired. There are several forms of anaemia, each with its own cause. However, the most common one is not having enough iron, Vitamin B, and other key nutrients.

Anaemia among women in Odisha

Anaemia, a major public health concern in Odisha, affects every one in two women in the state. The worst affected districts are Sambalpur, Sundargarh, Nabarangapur, and Malkangiri where seven out of 10 women are anaemic.

Mizoram has the lowest prevalence of anaemia among women with 24.8%.

As per the recommendations of World Health Organization (WHO) in 1972, a pregnant woman is diagnosed with anaemia when the haemoglobin level is below 11.0 g/dl (gram/deciliter).

Expectant mothers are more likely to get anaemia as their body produces more blood for the growth of their offspring during pregnancy. If they don’t get adequate nutrients their body won’t be able to produce the necessary red blood cells for more blood.

Pregnant women are more likely to be anaemic, if they are:

Why anaemia is a serious concern?

Iron-deficiency anaemia can cause severe health problems. It increases the risk of:

Maternal mortality: As per a major international study conducted by Queen Mary University of London, pregnant anaemic women have double the chance of dying during conceiving or after pregnancy compared to the women without the condition.

Perinatal mortality: As per a study titled ‘The Impact of Maternal Anemia on Perinatal Mortality’, it is estimated that the deficiency of iron among pregnant women is estimated to cause 591000 perinatal deaths around the world every year.

Premature delivery: During pregnancy, anaemia has been linked to an increased risk of premature birth and low birthweight.

What can be done to treat and prevent anaemia in women?

Anaemia in women can be treated and prevented by the following ways:

Healthy and nutritious diet: Anaemia can be treated by eating food that contains iron such as mandia (millet), green vegetables, beans, peas, eggs, fish and meat. Iron absorption from non-veg foods is two-three times more compared to veg foods. However, iron absorption can increase when vegetables are taken with Vitamin C rich foods such as lemons, limes, tomatoes, oranges, among others.

Supplements: Supplements should be taken after consulting a doctor, who will prescribe them based on the deficiency and the severity. There are numerous forms of them such as iron pills and tablets, vitamin C capsules, folic acid tonic, and vitamin B-12 injection shots.

Treating (or preventing) the causes of blood loss: Apart from dietary causes, anaemia is also caused by blood loss due to menstrual bleeding, gastrointestinal conditions such as gastritis, ulcers, and haemorrhoids.

What Odisha government is doing to address anaemia?

The state government has launched several schemes to address anaemia. They are:

Iron and folic acid supplementation under observation (IFSO): Under this program, children from Class I-VI are given iron tablets.

Anaemia Mukt Odisha: The reduction of anemia is one of the important objectives of the POSHAN Abhiyaan launched in March 2018. All India Institute of Medical Sciences (AIIMS), along with National Health Mission, Odisha and Unicef, launched Anaemia Mukt Odisha from October 9 to November 7, 2018, to make people aware of anaemia and its treatment.

Odisha can take ideas and lessons from several other states who have done some wonderful work in reducing anaemia among women, adolescents and children. Some of them are listed below:

Andhra Pradesh’s Indiramma Amurutha Hastham (IAH): It’s a state government program that targets to increase the nutrient intake of expectant mothers and lactating women as well as decreasing the prevalence and severity of maternal anaemia.

Assam’s success story: The eastern Indian state was able to halve anaemia in children as well as considerably cut the condition by one third in women and men between 2005-06 and 2015-16. The success was due to mass education campaigns that highlighted about the condition to the community.

Karnataka’s success in Anemia Mukt Bharat: Karnataka ranked fourth among the anaemia-free states in the country. The program aims to reduce the prevalence of anaemia by the end of 2022.

Sitha, a twenty-three-year-old resident of Ichchapuram town of Srikakulam district, barely 20 kilometers from Odisha border, was severely anaemic and malnourished when she was pregnant. Luckily for her, she was diagnosed early and provided services under the IAH scheme. She was registered at the town’s anganwadi and was later shifted to a hospital for institutional delivery. She is healthy, nourished and happy with her two-year-old daughter.

With such schemes, many women from Odisha can be benefitted like Sitha. The efforts of the administration must be linked to the central government initiatives such as POSHAN Abhiyaan, Anaemia Mukt Bharat, National Nutritional Anemia Control Program (NNACP), National Iron Plus Initiative (NIPI), among others.