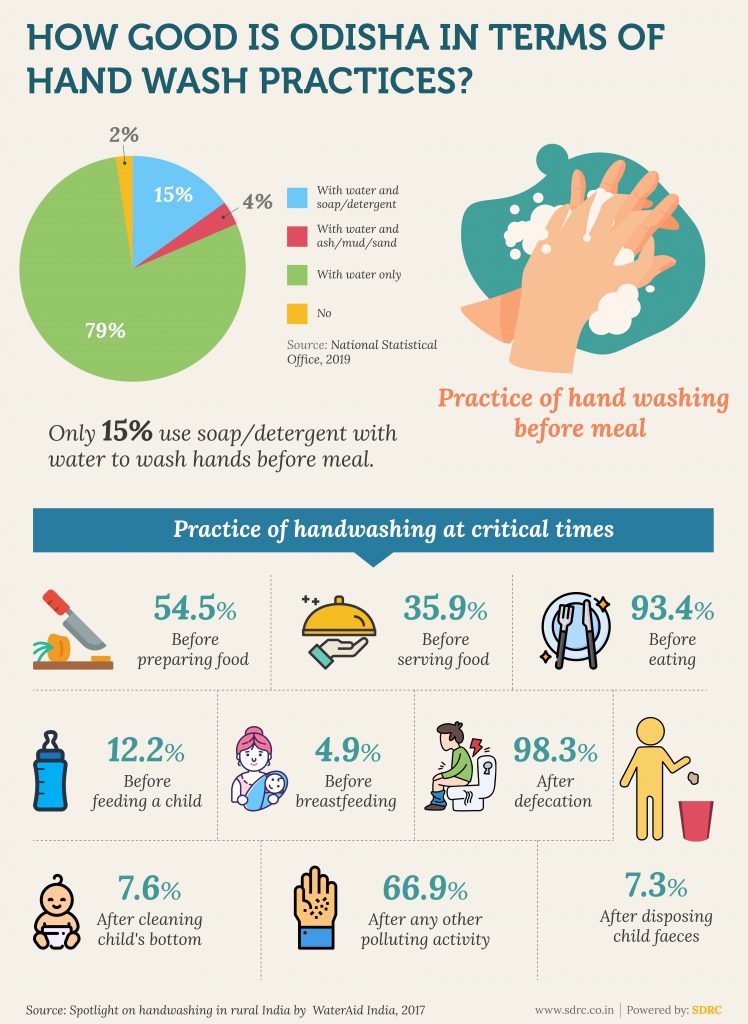 As the serious global pandemic COVID-19 tightens its grip around the globe, proper hand hygiene is the need of the hour. Hand hygiene, especially washing hands with soap and water, is the most accessible, effective and inexpensive way to eliminate viruses and contaminants from our hands and prevent them from entering our body. It’s the first line of defence against the spread of the highly contagious disease.

Our hands touch numerous surfaces, which may have multiple pathogens on them. We have the tendency to touch our eyes, nose and mouth without even realizing it. This gives the viruses an easy gateway into our body. It is also crucial to prevent major causes of illnesses and deaths resulting from various infections, viruses and bacteria.

What is the handwashing behaviour of people in Odisha?

Where does Odisha stands among other states and UTs in terms of hand hygiene practices?

As per a survey report released by the National Statistics Office (NSO) in November 2019, titled ‘Drinking Water, Sanitation, Hygiene and Housing Condition’, only 15.1% of the total  population in Odisha (both in urban and rural areas) wash their hands with soap and water before meal.

The state ranks 32nd, out of 36 states and union territories, in terms of hand hygiene before taking food.

The remaining states have less than 50% of population who was their hands with soap and water before meals. Daman and Diu ranks the lowest with 8%, followed by Jharkhand at 10.6% and Bihar at 14.3%.

As per the same report, only 53% of the total population in urban and rural areas in Odisha wash their hands with soap and water after defecation. The state ranks 32nd, the fourth lowest ranking states among 36 states and union territories, in terms of hand hygiene after defecation.

Why Odisha’s population should focus on hand hygiene more than ever before?

As per calculations based on census 2011 and National Health Profile 2019, Odisha has only four government hospital beds for every 1 lakh population. If the number of positive COVID-19 cases increases, it will be extremely difficult for many patients to get the necessary medical attention to recover.

Moreover, there are many people in the state with underlying health issues. If they get infected with the virus or any other pathogens, their chances of cure and recovery gets significantly lower.

The population cannot afford to witness an explosion in COVID-19 positive cases. Therefore, regular hand hygiene, and social distancing, is the best thing one can practice during this time.

Before you enter your home, wash hands using soap and water for at least 20 seconds. You can also use alcohol-based sanitizers if water is not easily accessible.