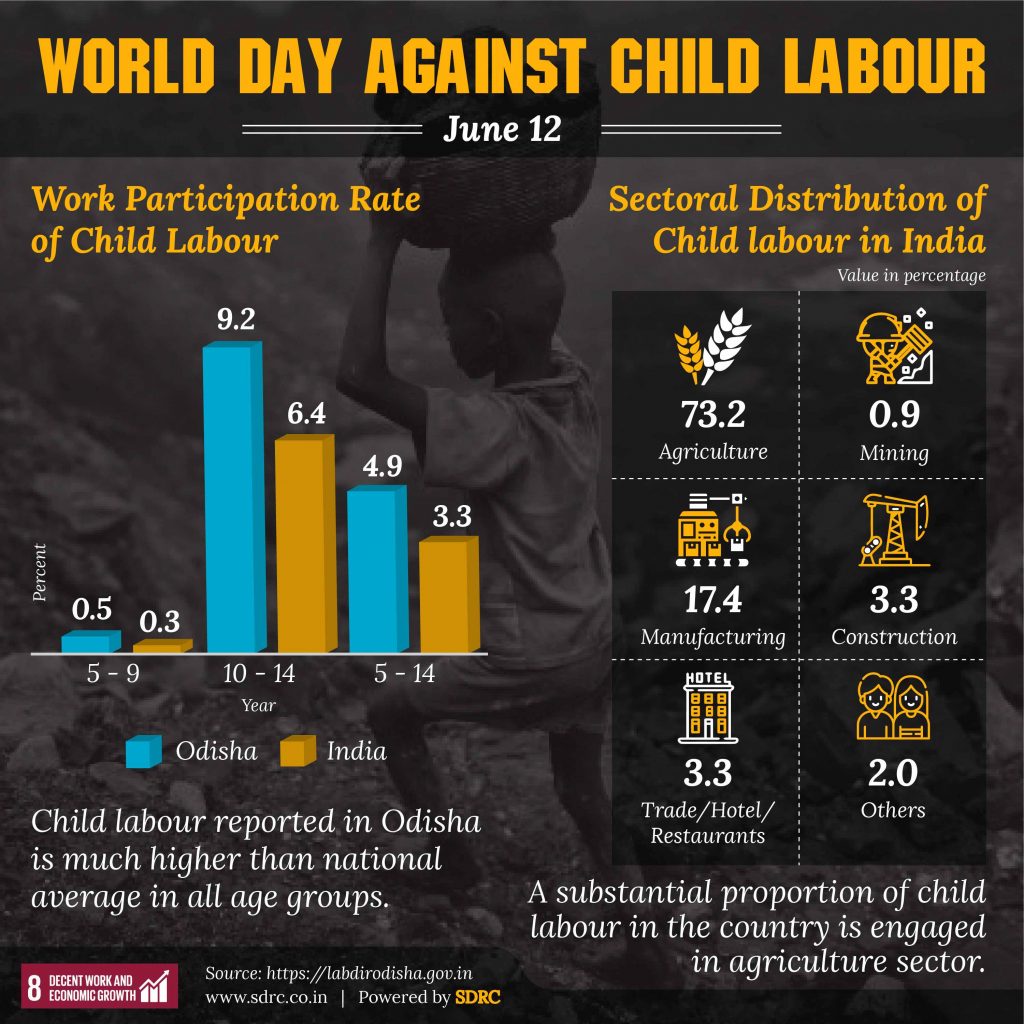 To supplement his family’s income, Hatia (name changed) started working in a highway dhaba when he was just nine years old. He used to begin his work early in the morning by sweeping the place, filling up water containers, and washing vegetables. He slogged hard all day by serving customers, cleaning tables, washing utensils, and everything in between till midnight.

He worked there for two years before being rescued by an NGO. Initially his father was reluctant to allow him to study and grow like other children but he eventually acceded when he got to know that he will get a mid-day meal during the daytime and a monthly stipend of Rs 300. The organization also arranged a job for his elder brother, who is 19 now, to work and earn a decent fee.

Like Hatia, there are many children who are exploited and forced to do menial labour. The most worrying thing is that their numbers keep rising every year. The main reason behind this is lack of awareness and poverty. With low levels of awareness and poor living conditions, parents who work as labourers cannot afford to fund their children’s education. Instead, they make them work from a tender age to supplement family income.

However, what they do not know is that child labour creates a vicious cycle of illiteracy and low income. It exploits children and strips them off numerous opportunities and deprives adults of better employment opportunities and higher wages.

A survey conducted by the Odisha State labour department in compliance with honourable Supreme Court order in 2013 found that Odisha had 2.15 lakh child labour, of which 121,526 were boys and 93,696 were girls. A report prepared by V. V. Giri National Labour Institute provides national and state level statistics on work participation rate (WPR) of children disaggregated by age group. The survey reports of working children as young as five to nine years.  Around 0.3% children aged five to nine years in India and 0.5% in Odisha are working. It reported that in the five to 14 year age group, Odisha has 4.9% working children as compared to 3.3% in India.

In February 2019, a written reply by the Minister of Labour and Employment  in the Parliament disclosed that 10,826 Child Labour Act violation cases were reported in the country in the last four years of which only 6,032 cases (56%) went to the stage of prosecution. Odisha reported 4517 cases and accounts for almost 42% of the cases reported nationally.

A substantial proportion of the child labour in the state is engaged in agriculture and allied activities. This sector alone accounts for over two-thirds of child labour. Manufacturing sector accounts for more than 15 percent of child workers followed by trade, hotels, and restaurants. Many children are engaged in various hazardous occupations such as tobacco rolling, labelling, and packaging; collection and assembly of charcoal and coal; workhands in motor garages; labourers in brick kilns and stone quarries; making and selling country liquor; and workers at matchbox and fireworks factories. Such occupations not only snatch away their innocence and childhood, but also endanger their health and lives.

How you can celebrate the World Day Against Child Labour?

As we celebrate International Day Against Child Labour, you can do the following things if you see a child working anywhere:

The Child and Adolescent Labour (Prohibition and Regulation) Act of 1986, amended in 2016, defines a person who is below the 14 years of age as a child. It prohibits their employment in any form and makes it a cognizable criminal offence. If you see a child running errands in any shop or tea stall, you must inform the owner about The Juvenile Justice (Care and Protection) of Children Act of 2015.

After informing the owner about the laws, you must consider reporting the case to the police if they still employ children. Boycotting the establishment or persuading him may not work. By calling the 1098 child helpline number, you can help distressed children and stop the exploitation once and for all.

Some parents who work as labourers avoid sending their children to school either because they want them to supplement the family’s income or they cannot afford their education. Instead they are likely to push their children into similar jobs. Therefore, they must be educated about the importance of education as well as various government initiatives.

If you want to do a good deed, nothing can be better than funding a poor child’s education. You can also be associated and donate funds to a group of people who are working towards rescue and rehabilitation of children.

Many NGOs work to rehabilitate and save children from working as labourers. You can join one of those organizations or help the organizations in some other ways.

If you patronize the establishments, brands, or institutions that make profit by employing children, you are also indirectly involved in the exploitation. Children in some countries are worst exploited due to poor labour laws, extreme poverty, and lack of political will.

The World Day Against Child Labour 2020 focuses on the impact of crisis on child labour. With the COVID-19 pandemic, children will be most likely the first to suffer. The resulting economic turmoil and labour crisis can push many vulnerable children into child labour.

We, as a nation and as a society, need to resolve to ensure that not a single child is forced into child labour. Every child in the state is given equal opportunity to study and enjoy childhood to the fullest.