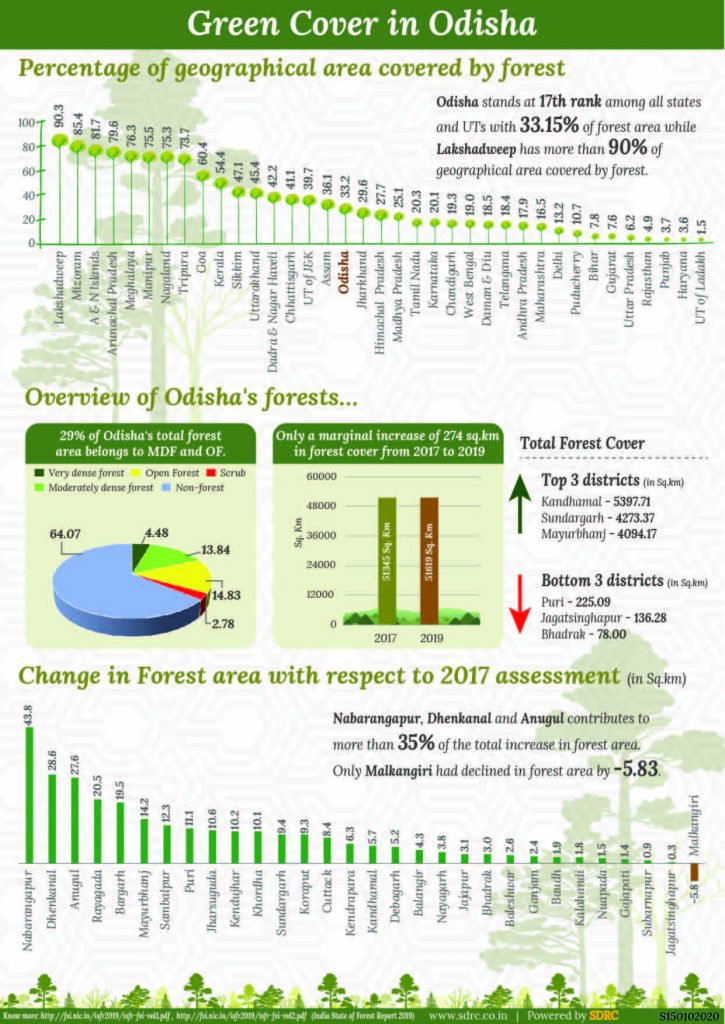 World Forest Day, also known as the International Day of Forests, is commemorated on March 21 every year across the globe to spread awareness about the environment.

On this day, the United Nations advises governments all over the world to undertake activities such as plantation drive and wildlife education and promote their forests. The theme for World Forest Day 2020 is ‘Forests and Biodiversity’ in accordance with the objectives of Sustainable Development Goal 15.

District wise, Kandhamal has the highest forest cover of 5,397.71 square km that is 65 per cent of its total geographical area. At 4273.37 square km, Sundargarh has the second highest green cover followed by Mayurbhanj at 4094.17 square km.

Boudh and Deogarh also have green cover that is over 50 per cent of their total geographical area.

Bhadrak has the lowest forest cover of 78 square km which is just 1.34 per cent of its total geographical area. Jagatsinghapur and Puri have the second and third lowest green cover at 136.28 square km and 225.09 square km respectively.

The eastern Indian state has 6,970 square km of very dense forest, which is just 4.48% of the total geographical area. It has marginally increased only by three sq km between 2017 and 2019.

Scrub is only 2.78% of total geographical area.

Odisha stands at 17th rank among all states and union territories with 33.15% forest cover.

Change in forest area with respect to 2017 assessment

Except Malkanigiri, all districts have recorded growth in their forest area. The district has recorded a decline of 5.83 square km of forest cover.

Nabarangpur, Dhenkanal and Angul account for more than 35% of increase in forest area.