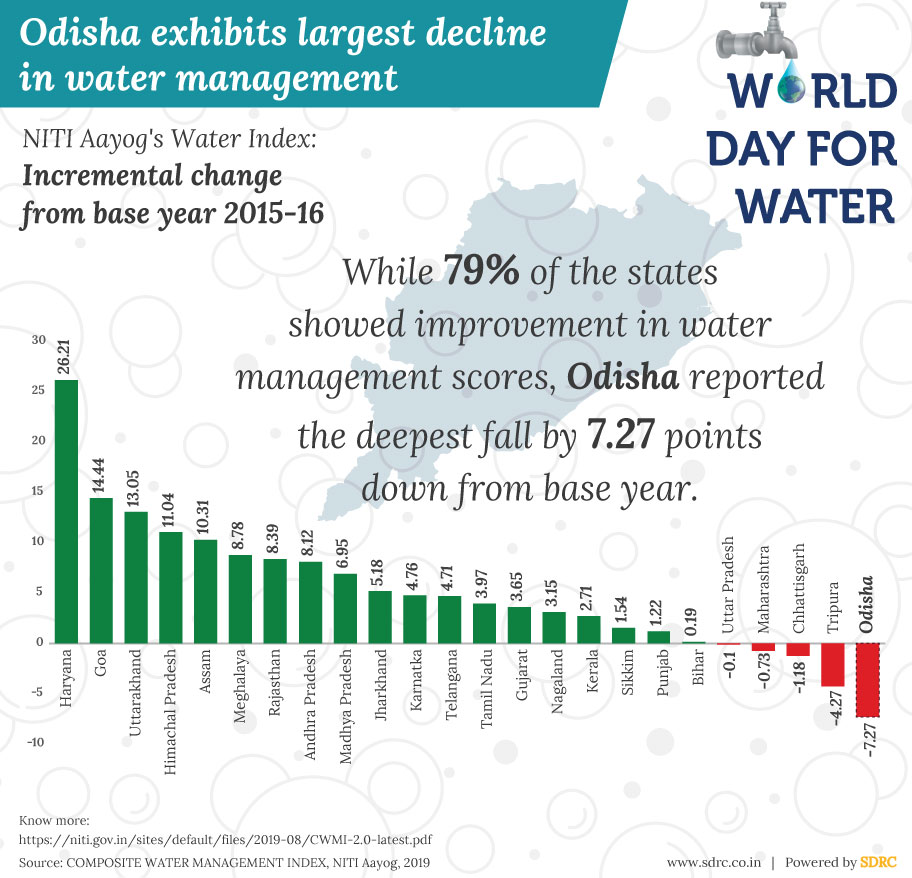 The World Water Day is observed on March 22 every year to highlight the significance of freshwater and promote sustainable management of water resources.

The theme of this UN observance day focuses on topics related to clean water, sanitation and hygiene (WASH) that is in accordance with the objectives of Sustainable Development Goal 6. This year’s theme is ‘Water and Climate Change’.

As per Niti Aayog’s composite water management index released in August 2019, Odisha exhibits the largest decline in water management over the last three years. Out of 24 states surveyed, the state reported highest decrease of 7.27 points from 2015-16 to 2017-18.

Odisha also witnessed the highest drop of 29 percentage points in lining of identified canals and distribution networks, from 54 in 2015-16 to 25 in 2017-18.

The state has not been able to enact legislations for rainwater harvesting in public and private buildings and supporting protection and preventing encroachment of water bodies.

The eastern Indian state also emerged as a bottom performer when it came to:

Nationally, 19 of 24 assessed states (79%) have registered better water management scores, with an average improvement of +5.2 points.

Haryana has reported the highest progress with 26.21 points from 2015-16 to 2017-18. Goa is the second top performing state with an improvement of 14.44 points in the past three fiscals, followed by Uttarakhand with an increase of 13.05 points.

Where Odisha is performing well?

The state is performing well in the following areas:

What best practices can be adopted by Odisha?

For better management of its freshwater resources and their sustainable usage, Odisha needs to:

What it can learn from other states?

Odisha needs to learn from several state governments’ initiatives on water management and utilization of their resources. Some of them are:

Telangana’s Mission Kakatiya programme: The government of Telangana launched a flagship programme named Mission Kakatiya to restore over 46,000 tanks across the state and bring more than 20 lakh acres land under cultivation.